How the English Approach Language Learning: Learning the Lingo Part I

The Captain and I settled into uncomfortable silence, looking down at the space between us. We had made an executive decision to, maybe, engage the services of a private Dutch tutor to finally get to grips with the language. There was no excuse as the company would pay. We looked up at each other in mute resignation.

Our Dutch is not at the level we want it to be, but we get by. Navigating the menu selections when phoning anywhere is not the ordeal it once was.

Most of our day is spent speaking English giving us little incentive to make a concerted effort to get beyond the every day stuff. Much to the disbelief and embarrassment of Harry, who, with the sponge like qualities of youth, speaks and reads Dutch fluently, although at the American School.

When we first arrived in The Netherlands I was enthusiastic, positive and ready to hit the ground running. Within five minutes I’d signed up for everything including Dutch classes. How hard could it be? Sixteen million Dutch manage to speak it and it’s only polite and good manners when moving somewhere new to integrate and engage.

I know, the optimism of the naïve.

It must be pointed out that in my newly acquired enthusiasm for linguistic learning I’d overlooked a few basic facts about myself and my appalling language skills.

I am genetically English. We do not do languages. In our glory days of the British Empire under Queen Victoria, one-quarter of the globe was under British rule. I’m sure it must have been at this point in history that English took hold as the global language for politics and commerce. I’d like to think so.

Growing up against this historic backdrop, the British approach to dealing with people speaking a different language has been to speak loudly and enunciate clearly (in English of course), as if speaking to a rather dim two-year old. The hope being that somewhere between the spoken word and receptive ear an act of symbiosis would take place garnering understanding between the two.

When observed from an external viewpoint I can see this may be rather alarming for the recipient.

The British Education system, in its wisdom, did make a rather half-hearted attempt to introduce modern languages to the curriculum when I was at school. As Latin and Greek had been the only options available up to this point, it was a very enlightened move for its time.

Unfortunately, all innovation stalled there. The concept of selecting something imaginative and useful like Spanish, this at a time when Britons were flocking to the Spanish Costas for their holidays and Spanish was regarded as major global language, was far too avant-garde a step for the Establishment.

In their wisdom the black gowns of academia decided French and German were the more appropriate options. Dear God. Why?

It is a truth acknowledged by the whole of Europe that little love is lost between the peoples of the mighty Great British Island and its neighbours across the English Channel. Particularly the French and Germans. There has been some history. 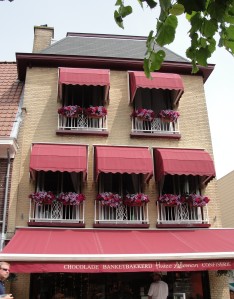 Scratch the surface with the French and the Battle of Agincourt 1415 (Henry V, we won) still rankles. On their side, regaining Calais from Queen Mary (1558) is still current enough to be conversational.

As for our Teutonic neighbours to the east what can I say? At last years World Cup the loudest taunts from English fans to the German soccer squad were the rousing jeers of, ‘two world wars and one world cup’, along with the two fingered British salute, allegedly a gesture made by British archers to the French at Agincourt.

There are some serious issues going on here.

Wanting to embrace our new culture I pushed these matters to the back of my mind, believing I would overcome them with determination and will power. I ended up one rainy Tuesday morning sitting in a cold, dark room with a group of recently arrived expats, all jet lagged and looking like deer caught in the headlights. To me, they all looked smart, multi-lingual and sophisticated. I wanted to run.

Our Dutch teacher was the dear Dorien, a recently repatriated Dutch expat, the very best Dutch person there is. I realise, looking back, that having returned ‘home’ from her final posting in Brazil, she was probably struggling to adjust more than we were.

My first shock was discovering our work book was in Dutch. Duh. I raised the matter immediately with Dorien. Where was the Dutch/ English vocabulary at the back of the book? Apparently not everyone learning Dutch is English speaking. Really? Not even as a second or third language? The whole notion was alien to my genetic make-up.

More importantly how the hell would I be able to remember anything if I couldn’t constantly refer to the glossary at the back?

After the first ten weeks the stress was beginning to show. The more classes I attended the less I seemed to know. I began to use long forgotten German words, or used Germanic pronunciation, mortifying as I hadn’t spoken the language since leaving school and remember nothing of it. Apparently a typical brain response when learning a new language is to recall languages learned in the past. Hmm.

I continued Dutch into the spring semester despite being frustrated by my inability to grasp any more than the basics. I went mainly because I loved seeing my new friends, going for coffee afterwards and talking about our experiences in the Netherlands.

The biggest problem with the Dutch I was learning was its inappropriateness for the life I was leading. Introducing yourself at formal gatherings (‘My name is Jane, I have  moved here from America. I have three children’) presumably whilst juggling a wine glass and a plate complete with a sliding canapé wasn’t what I needed. I could make reservations for the theatre or a restaurant but in real life I didn’t need to. 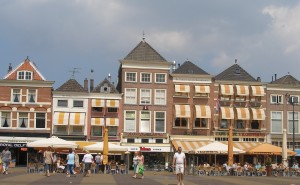 ‘Please can you help me, my car has broken down, I need to collect my son from school, my husband is in Singapore and the dog has just thrown up – can you recommend a vet?’

‘The heating system you installed last week is making a horrendous noise and we haven’tslept for three nights, please send someone out today’

‘We have a water leak and our neighbours are threatening legal action, please can you tell us where the stop-cock is?’ would have been far more practical but weren’t covered in our Dutch book.

All these classes and I still hadn’t managed to go to the local shops, gather my courage and speak, in public, in Dutch. The mere thought reduced me to a gibbering, mindless wreck. It gave me far more insight and empathy for people who moved to my home country and struggled to learn my language.

The day came when I looked myself in the mirror and gave myself a stern talking too. I had to decide whether I was a lion or a mouse. I would have a Dutch day. I would go on my bike with my shopping list, converse in Dutch. I would have a beaming smile, apologise for murdering the language but be brave and have a go. I practised my stock phrases all the way to the shops.

The cheese shop would be my first port of call. I felt like I wanted to throw up, but there was only one other customer in the shop and the staff had always been a friendly bunch. Of course by the time it was my turn a line had formed behind me.

The lady behind the counter was a little fraught, her encounter with the previous customer had not gone well, the line was growing and she was on her own. Her impatience with life in general was obvious.

I took a deep breath and started on my well rehearsed patter. She interrupted almost immediately, in English. 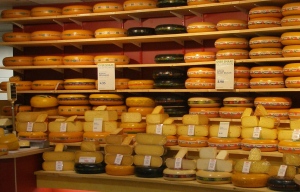 ‘What? What are you trying to say?’ her voice was harsh and mortifying loud. The conversations behind me stopped. I froze. I didn’t know where I was, what I wanted, what to say or in what language. As I stood, mouth opening and closing in terror she rolled her eyes, banged on the counter in frustration and yelled, ‘Come on, come on! What language do you want? English, French, Russian, Spanish, German? I haven’t got all day!’

Mutely I pointed out a couple of random items, paid and turned to walk out of the shop, past the Dutch shoppers who eyed me with curiosity and barely disguised laughter. I wanted to get out of there before the stinging in my eyes translated into public tears.

I got on my bike and pedaled home as fast as I could, utterly destroyed. This learning a new language was going to be a little more difficult than I’d anticipated. But I was damned sure I wasn’t going to be a mouse.

Our anglo/american family used to live in four countries (USA, Canada, UK and the Netherlands) on two continents, separated by distance, time zones, circumstance and cultures. It has been a scary, enriching, challenging place to be. The only things guaranteed to get us through were a sense of humour and the amazing people met along the way. . . This year everything changed with a move for us from the Netherlands, – and a move along with us for our son and his wife from the UK – to Houston, Texas, the same city as our daughter. With our youngest in Vancouver, Canada, we are now all living on the same continent. How this happened, and more importantly why, will be the subject of this ongoing blog...
View all posts by wordgeyser →
This entry was posted in England and Things English, Expat Experiences, Family Life, Learning Dutch, Personal challenges and tagged Battle of Agincourt, Expat, expat experiences with languages, expat life, expats learning new language, how to learn a new language, humor, languages, learning a new language, learning Dutch. Bookmark the permalink.

1 Response to How the English Approach Language Learning: Learning the Lingo Part I