How much personal living/working space does a Dutch person have?

I’m hoping everyone is up to a mental workout as I’ve come across some facts on the Netherlands which make for very interesting reading.

This morning there was an article on the dutchnews.nl website, quoting information released yesterday by the CBS, the Dutch national statistics office.

My initial reaction was to be totally impressed by the amount of green space here in this small country. A whopping 67% is agricultural/woodland (not including parkland) out of a geographical area (land and water) of 41,543 sq km /16,049 sq miles. (Wikipedia stats – slightly different to CBS figures but only marginally so; maybe the tide was out.)

I think that’s a pretty amazing statistic for any country.

It took a bit of time to ruminate over the figures and as the morning brain cranked into gear it occurred to me that what they also meant was the entire population of the Netherlands lives and works on 8% of available land. 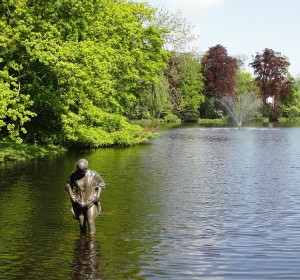 Try and stick with me here because it’s worth it. Make a cup of coffee, you’ll need an alert brain.

Keep focused here if you can because it’s about to get mind boggling.

Put the whole population in that 8% of land and take it one step further (actually several – thank god for mathematical converters) and the result is that each person in the Netherlands has – wait for it – 199 sq m \ 238 sq yards of personal living/working space.

So how come the population isn’t huddled together like a ginormous flock of flamingoes balancing awkwardly on one leg?

Because the Dutch are brilliant at utilising what they have in the most creative and enriching way possible. Buildings are designed beautifully with regard for their use and position; they build up, not out, but not so high you feel overwhelmed by them. Apartments for the most part overlook and are surrounded by green areas – the 67% of agricultural land, woodland and beaches which are all publicly accessible by miles and miles of footpaths, bike paths and horse trails.

Then there is all that water (20% of the country) for every outdoor recreational activity you can imagine on lakes, canals and the sea.

Now I have to confess I’m someone who needs an awful lot of physical, mental and emotional space. I feel like a rat in a maze when confronted by large groups of people and start to noticeably twitch and turn slightly aggressive if I can’t find a quiet, calm place at some point in the day.

I know, it’s hard to believe given my sociable nature.

Studies on Norwegian white rats (Rattus norvegicus – used by scientists for research) have shown that in large population densities rats show increased stress and aggression levels and it seems humans react the same way. Having moved from a US state where the population density is 272 people per sq km /105 per sq miles (90%-ish less people per sq km/mile than here) no wonder I have days when I lock myself away and disconnect the phone.

The truly amazing thing from all of this is the Netherlands, despite the size of the population in a relatively small space, are a calm, measured and social people. There are times, admittedly, when they can be brusque and, well, rude, but that can be forgiven when you look at how they have organised a system of living where everyone benefits from available space.

Sometimes you have to take your hat off to the Dutch.

Our anglo/american family used to live in four countries (USA, Canada, UK and the Netherlands) on two continents, separated by distance, time zones, circumstance and cultures. It has been a scary, enriching, challenging place to be. The only things guaranteed to get us through were a sense of humour and the amazing people met along the way. . . This year everything changed with a move for us from the Netherlands, – and a move along with us for our son and his wife from the UK – to Houston, Texas, the same city as our daughter. With our youngest in Vancouver, Canada, we are now all living on the same continent. How this happened, and more importantly why, will be the subject of this ongoing blog...
View all posts by wordgeyser →
This entry was posted in Dutch Culture, The Netherlands and tagged green space in the netherlands, how the dutch cope with large population, land use in the netherlands, Netherlands, Population, population density in the netherlands. Bookmark the permalink.

4 Responses to How much personal living/working space does a Dutch person have?