‘Finding My New Normal’ – A Balloon for your Son

Last year when I first started writing this blog, I began following another, launched around the same time, written by an American living in London.

I’d clicked into her blog having no idea what it was about, intrigued by it’s title Finding My new Normal. The words on her profile were haunting,

“On August 13, 2010 our lives were shattered when we lost our son at 36 weeks pregnant. After struggling with infertility for many years, we thought we were finally going to have our miracle baby. Sadly, this is not what happened and I struggle every day to make sense of it all. But I am determined to get my life back. Not my old life of course, but a new life . . . a new normal.”

I have followed her since, reading her eloquent words on how she and her husband have learned to cope with the devastating loss. Her writing has been heartbreaking but ultimately uplifting; her determination to honour the memory of her son and survive his loss as a functioning human being has been inspiring.

She writes anonymously, not even her family are aware she has this blog, so she can be honest about her feelings and speak openly about the reaction of her family to that loss. She talks with a candid directness about being overcome with grief when she least expects it, dealing with meeting pregnant women and her hopes for a future pregnancy through IVF treatment.

In the last week she has undergone IVF and will know next week if she is pregnant. All of this is overshadowed by the one year anniversary, today, of her son coming into the world still-born.

She has written about the guilt she and her husband feel at having another child, the fear they are replacing their first. How they have come to terms with those feelings and found the courage to take this chance in the hope, this time, they will have a child.

So today they mourn their son not knowing if the chance of a new life, a new miracle, is growing inside of her.

These past weeks she has thought deeply about how she can commemorate this anniversary and has decided to release a balloon and take a photograph. She has asked her family and friends if they would do the same. No pressure, only if they feel they’d like to. She has extended that invitation to anyone she has connected with through her writing. Her plan is to put all the photos together, in a memory book. One day, when she can. Something tangible and real. To know people cared about him, that he won’t be forgotten.

She has found her path through the darkness of grief by writing; from those early days of hopelessness she has clawed her way back and helped countless others with her words.

Finding My New Normal you’ve come a long way, it’s been a heavy journey and I hope, next week, the sun will start to shine again.

With love, our balloon from Wassenaar, The Netherlands. 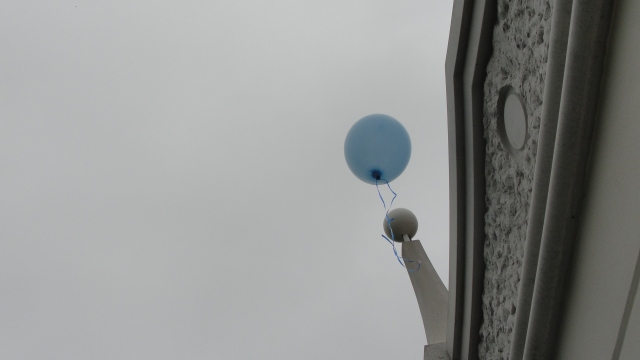 Our anglo/american family used to live in four countries (USA, Canada, UK and the Netherlands) on two continents, separated by distance, time zones, circumstance and cultures. It has been a scary, enriching, challenging place to be. The only things guaranteed to get us through were a sense of humour and the amazing people met along the way. . . This year everything changed with a move for us from the Netherlands, – and a move along with us for our son and his wife from the UK – to Houston, Texas, the same city as our daughter. With our youngest in Vancouver, Canada, we are now all living on the same continent. How this happened, and more importantly why, will be the subject of this ongoing blog...
View all posts by wordgeyser →
This entry was posted in Family Life, Inspiration and Reflection, Personal challenges, Women and Female Related and tagged commemorating a stillborn child, finding my new normal, grief and loss, losing a child, loss of a child, remember a lost child, still-born child. Bookmark the permalink.