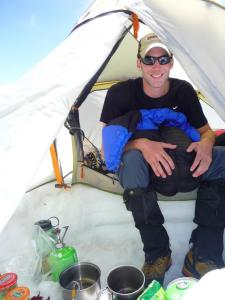 A year ago James Stephen Brownhill was tragically killed, alongside his climbing partner and friend, David Evans, during an ascent of Mont Blanc. A peak previously climbed  along with others on different continents.

A year in which everyone who knew James has had to adjust to life without him. Adjust, not accept or come to terms with, but find an equilibrium to balance this devastating shift in the universe, a realisation that life, or rather the living of it, is not fair, or kind or guaranteed.

We’ve all experienced that silent gnawing fear which grips each of us when a child is late home, travelling, spreading their wings. The ‘what ifs’ of every danger and we pray silently they make good choices, heed the advice we’ve tried to instil from infancy. Most times those fears are allayed with the turn of the key in the front door, the car pulling into the driveway, a phone call to say they’ve arrived.

For James’ parents the key didn’t turn, the car didn’t arrive and the phone call, when it came, was the stuff of nightmares.

They had talked with him about the risks, the ‘what ifs’ of the passions he lived for. He understood more than them what those risks were and did everything he could to ensure his safely and the safety of others who climbed with him. For him, not following his passion was not an option.

The last year is not one his family wanted to endure, a year of birthdays, anniversaries, special days without him, without his energy and warmth. But endure it they have, through dark days and longer nights of heartache.

Many would have turned their faces to the wall and given up, and there have been times when that seemed an option. But they didn’t. To honour his memory they established the James Brownhill Memorial Fund which, 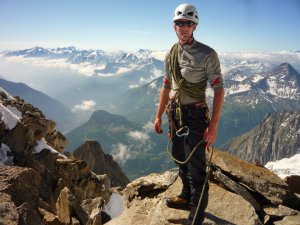 “aims to encourage and foster a higher level of safety, good practice and sustainability within university climbing clubs. This fund will award volunteers with bursaries to undertake courses to consolidate and develop safe climbing practice, for teaching new and inexperienced climbers in individual and group situations…through this fund we hope to preserve a passion and attitude to safe climbing that James consistantly upheld. “

In the past year there hasn’t been a week without some fund raising event or act of support in his memory, involving over 1,500 people. More than 2000 JBMF Christmas and greetings cards have been sold, designed using photographs taken by James and his family. The fund has already awarded 13 bursaries and will be able to fund 150 more.

The fund has been a labour of love, trying to make sense of the unthinkable, keeping the memory of a beloved son, brother, boyfriend, nephew and grandson alive whilst hopefully helping others.

A year of grief, pain, getting through and moving forward in slow motion. The anguish and disbelief are no less today than when they were given the devastating news. They are slowly, very, very slowly learning to adjust to the reality of their loss.

This weekend finds the families of both James and David in Chamonix, laying a memorial stone in their memory.

All of us who knew James, whose lives he touched in so many ways, will be there in spirit. To quietly remember a fine young man and acknowledge the indomitable spirit of the family he has left behind.

Our anglo/american family used to live in four countries (USA, Canada, UK and the Netherlands) on two continents, separated by distance, time zones, circumstance and cultures. It has been a scary, enriching, challenging place to be. The only things guaranteed to get us through were a sense of humour and the amazing people met along the way. . . This year everything changed with a move for us from the Netherlands, – and a move along with us for our son and his wife from the UK – to Houston, Texas, the same city as our daughter. With our youngest in Vancouver, Canada, we are now all living on the same continent. How this happened, and more importantly why, will be the subject of this ongoing blog...
View all posts by wordgeyser →
This entry was posted in Family Life, Inspiration and Reflection, Personal challenges and tagged Chamonix, Climbing, climbing deaths, climbing Mont Blanc, Frendo Spur, James brownhill, James Brownhill Memorial Fund, James Stephen Brownhill, JBMF, loss of a child, moving forward with loss. coping with loss, remembering loved ones. Bookmark the permalink.