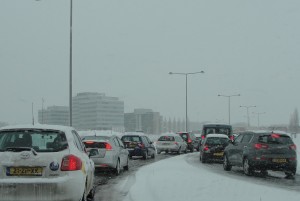 I’m done with the snow and you can cancel Christmas too. We woke up this morning to the wonderful light and deep quiet of a new snowfall, a real magical winter wonderland.

Like an idiot I’d promised Harry I’d drive him into school as he’s had exams this week. We headed out in swirling snow, and by the time I’d dropped him off and returned home I was frazzled.

I’d planned a calm, peaceful day spending some down time with Missy, who hadn’t emerged from under the duvet since she arrived in the Netherlands from Baton Rouge, USA on Wednesday. When the Captain returned home from New York via London later in the afternoon I wanted to be serene and relaxed waiting to soothe his hassled brow.

After a cup of coffee it was time to take on the challenge of the day. My dear friend Liz was storing two of M&S’s finest turkey breasts (with chestnut stuffing) in her refrigerator. I’m sorry, but the days of cooking a 20lb turkey à la Martha Stewart are long gone – I do not have the wrist strength to lift the darn thing in and out of the oven and baste it every half hour.

Liz called yesterday and asked the turkey breasts be removed from her residence immediately as she needed the refrigerator space. Fair enough, she’d driven to the UK to get them so I was suitably grateful. I could be there and back in less time than it would take Missy to get up and showered, so no time wasted.

By 9.15 I was back on road. In normal conditions it takes 15 minutes each way. Once I hit the highway I had a feeling it was going to take a tad longer. The clear road surface of half an hour before was covered with several inches of fluffy white flakes, the sky an inky black and snow falling in chunks rather than flakes.

I sighed and decided to go with the flow, switched on the radio and tuned my brain out. Only that wasn’t possible. Driving was taking every ounce of concentration.

My vehicle has all wheel drive, a snow button (see Snow Day in The Hague), a manual override on the automatic gearbox and I still managed some pretty spectacular skids without touching my brakes at all. I’ve decided I’m getting old – I used to love driving in conditions like this, now it’s just a pain.

The trip took three and a half hours. 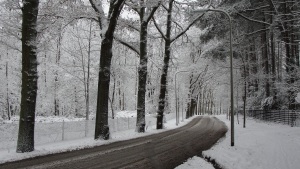 I never want to listen to Sky radio 101 FM or the chirpy ‘hundert een FM sky radio’ jingle ever again, but it was the only station where they spoke Dutch slowly enough for me to get the gist of the traffic news. Nor did I want to figure out what they’d been doing to slow their speech down to understandable levels.

Utrecht was having a bitch of a time and there was a 30km gridlock around the Amsterdam ring road and most other major roads were at a standstill. Worse, Schiphol (Amsterdam) airport was on the verge of closing at the same time the Captain sent a text to say he had landed in London.

There was nothing I could do except listen to the radio but the overly jolly Christmas songs were enough to make you bang your head on the steering wheel, which I did several times to alleviate the boredom and rid myself of the throbbing headache which started one hour and twenty minutes into the expedition.

I debated several times whether to turn round and go home, assuming I could do a U-turn safely, but having got so far I kept thinking conditions would improve.

There are only so many traffic light changes a person can tolerate without moving before anxiety and stress levels started to increase. The Dutch are a stoic bunch and I was impressed by their calm and reasonable behaviour in the face of major gridlock, well, for the first hour or so at least, then white van man began to crack.

Before long white vans were slithering all over the place causing chaos and mounting resentment among the rest of us. After observing several rear-end shunts the situation reached critical and a number of white van men were out of their vehicles threatening each other with extreme violence. This cheered the rest of us up no end and injected some much needed entertainment into the proceedings.

Whilst they were sliding their slightly scrunched vans from the highway we started to inch forward. The headache was getting worse and Archie cross-legged and cross-eyed on the back seat.

Did I mention he was with me?

He was dragged along so Missy wouldn’t have her beauty sleep disturbed. He loves being in the car but even his enthusiasm had waned. He’d managed to climb over from the trunk/ boot into the back seat and made himself very cosy. From there he had the perfect vantage point to suss out what was going on and check out other travelling canines.

He and a rather vicious looking Alsatian in a white van exchanged throaty growls and several of those ‘come on then, let’s see what you’re made of’ barks. He was also rather taken with a pretty little Bichon who was frantically trying to attract his attention for a couple of hundred yards. He played it very cool.

We had the windows down for a while so he could catch snowflakes on his tongue, but even that palled. In the end he adopted a superior sphinx-like pose and expressed his ennui with heavy sighs and the occasional disdainful yawn.

Back in local territory I decided we both needed some fresh air – there’s something about being stuck in traffic, or airports, which make you dream of running through sunny meadows or along a sandy beach. We settled for a copse near us which we had to drive past to get home.

Boy, was that fresh air good. The quiet was absolute – that wonderful muted softness which absorbs all sound and makes you think you’ve walked through a wardrobe into heaven. It was glorious and by a quirk of fate I had my camera in the car.

By the time we got home a sense of calm had replaced that awful thick-headed fugginess and I was hopeful the day could only improve.

Within half an hour it was clear the Captain wouldn’t be flying home tonight, and school had sent an emergency text message to say it was closing early. Another forced trip into the winter wonderland was endured, only to find Harry had jumped on a bus to get home.

It’s late and I’m sitting cupping a mug of mulled wine in my hands – come on it’s been a tough day – watching the snow fall outside. The Captain is in a hotel at Heathrow where he’s scheduled to fly out in the morning.

We may still need to implement plan B – he hires a car, drives to Harwich and comes over on the ferry tomorrow night. Assuming there are tickets available and I can get down to the Hook of Holland Sunday to pick him up.

Oh well, that’s life and at least I’m not one of the two thousand people expected to sleep at Schiphol tonight, my turkeys are in the freezer and everyone’s safe. Maybe Christmas could be back on the cards after all. Talking of cards…

Our anglo/american family used to live in four countries (USA, Canada, UK and the Netherlands) on two continents, separated by distance, time zones, circumstance and cultures. It has been a scary, enriching, challenging place to be. The only things guaranteed to get us through were a sense of humour and the amazing people met along the way. . . This year everything changed with a move for us from the Netherlands, – and a move along with us for our son and his wife from the UK – to Houston, Texas, the same city as our daughter. With our youngest in Vancouver, Canada, we are now all living on the same continent. How this happened, and more importantly why, will be the subject of this ongoing blog...
View all posts by wordgeyser →
This entry was posted in Christmas, Thanksgiving and Holidays, Expat Experiences, Inspiration and Reflection, The Netherlands and tagged Christmas, December in the Netherlands, driving in snow, Expat, loving snow, serenity of snow, snow days in the netherlands, snow in the netherlands, Thanksgiving and Holidays, traffic delays in snow, winter driving in the Netherlands, winter traffic in the netherlands. Bookmark the permalink.