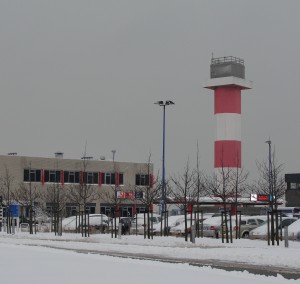 Here we go again. Further adventures in the Snowmobile. The Captain is en route from Harwich along with refugees from the nightmare of Heathrow and the other London airports.

Guess who’s designated to pick him up?

I’m also collecting Don and Stuart, husband and son of Liz, who have ended up in the same boat as the Captain. Literally. Having mentioned Liz in a earlier blog I’m now on a parallel adventure related to her. Weird karma.

It’s Sunday morning and I’m sat in the dark at the Hook of Holland ferry terminal. Not in the terminal, in my car. It’s taken one and a half hours to get here with no traffic on the roads. What other idiot out in this at 7 on a Sunday morning?

I’ve already reversed into one vehicle, a white van (divine retribution for what I said about the white van tribe last week) and the Captain has called to say the ferry will be two hours late. The temperature is -3°C.

There is no obvious reason the ferry is late, it left on time, the weather was okay and there’s not much to avoid in the North Sea. The Captain, being a maritime man, assures me from his cabin there is no reason on this God damn earth for the delay. I’m sensing a small amount of frustration.

He’s secured himself a luxury cabin below the bridge, with an eight-foot diameter porthole allowing the same view of the ocean as the crew on watch above. I have a feeling he’ll have spent most of the night propped in his bed looking out of the window keeping a steely eye on the weather and his ears cocked for the subtlest change in engine noise. He’s probably feeling a tad manic now.

I haven’t told him that the reason for the delay is here at the Hook. In the last 15 minutes I’ve seen four gritting trucks and three snow ploughs fairly whizzing round the ferry terminal. It’s just started to get light which I’m sure is no coincidence.

Not having seen a gritting truck for the last five days I watch in awe as these mythical beasts growl and bellow their way around scooping up the very snow which is offering  the only traction any of the vehicles around me have, exposing sheet ice underneath.

You’ve got to wonder.

I have to say it’s all rather grim. Not a photo op in sight and another hour and a half to go.

There’s a kind of greasy Joe’s café with steamy windows at the terminal entrance, full of jolly truckers bundled up in layers, with scarves knotted jauntily under their chins, cupping steaming buckets of tea in their hands. Someone is obviously recounting a hilarious tale as periodically they rock back on their heels and roar with laughter.

Glad someone’s having a good time.

There’s also the terminal building itself which I know has only vending machines and toilets which I will need. Soon.

I’m loath to leave the snowmobile. I’m parked, like everyone else, in a no parking zone and need to move quickly should a uniform appear. This is Holland, I’m sure one will.

I’m trying to factor the warm air inside/ cold air outside ratio. How long will it take the cold air outside to leech the heat from inside the vehicle? I wonder vaguely if there is a law for that, one of Newton’s or Einstein’s, but did they have a car? I refuse to turn on the engine until hypothermia is imminent.

Having been trained well by my father, I’m wrapped up warm in several layers topped with a down coat and six-foot scarf suitable for head, neck, and in extreme conditions, face coverage.

The biggest debate was which boots to wear. Uggs for warmth and ultimate comfort but useless in the wet and hated with a passion by the Captain, or waterproofs in case of vehicle breakdown and having to trek through snow. I’ve gone with the waterproofs and two pairs of socks including Harry’s Scooby-Doo slipper socks which he’s never worn.

Already the cold is sucking the heat from my feet and knees, but there is a dog blanket in the boot/ trunk which I could reach in an emergency if I climbed over the seats, not an easy task wearing all these clothes. I can’t feel my feet anymore and wonder if my lethargy is caused by first stage hypothermia.

I have my insulated ‘to go’ mug of tea, which I haven’t drunk in case I need the bathroom but decide to drink it to avoid dehydration becoming an issue. The one thing I didn’t throw in the car was a shovel.

I’ve cleared candy wrappers out of the door pockets and collected all the loose change from under the seats, made my shopping list for the week and filled in the Christmas order for vegetables from the greengrocer on the Langstraat. That done, I’ve reorganised the centre console and found two working torches, 500 ibuprofen, several key rings, pens and a pair of broken glasses I didn’t know were there.

The contents of my purse are even more surprising. Five teabags in handy container – a trip to the greasy Joe’s could be on the cards – umbrella, camera, fabric samples from 2006, tissues, nail polish and file, hair brush and clips, eye drops and sundry lotions, potions and hand sanitizers. Eat your heart out Mary Poppins. I’m surprised there’s not a spare pair of knickers in there.

I’ve found some wet-wipes, wiped over the dashboard and organised the coins into size order in the ashtray. I always keep a few US quarters in there for using in the shopping carts, and less likely to disappear than the 50 euro cent coins.

More cars are arriving at the terminal, it’s a real hive of activity again. It’s very murky out there and getting colder in here but I still don’t want to leave the relative security of the car, especially as it’s now decluttered and clean.

I’ve never understood why, in every horror movie I’ve ever seen, people always leave the sanctuary of the tent, vehicle, house etc in the face of demonic or bestial danger. Guess that’s why horror films don’t really cut it for me.

Oh. My. God. Through the murky greyness a white ‘S’ on a red background is looming through the mist like a prehistoric leviathan and lumbering slowly alongside the dock.

The Captain is finally home.

After leaving JFK (New York) on Thursday, arriving at London City Airport Friday, transferred to Heathrow by nice (at that time) BA staff who found a car and a driver and put him in a hotel Friday night, four trains across London to Harwich on Saturday, the Harwich/ Hook of Holland ferry Saturday night, my hero is finally home.

Shoot, I’d better go find the bathroom and some hot water so the Captain can have a decent cup of tea… 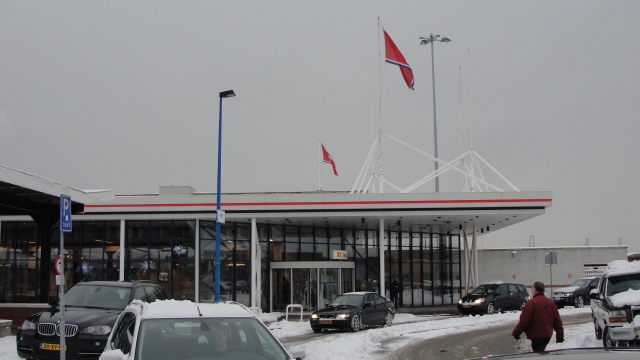 4 Responses to Planes, Trains and Snowmobiles